Bass Player Knows How to Change the Mood 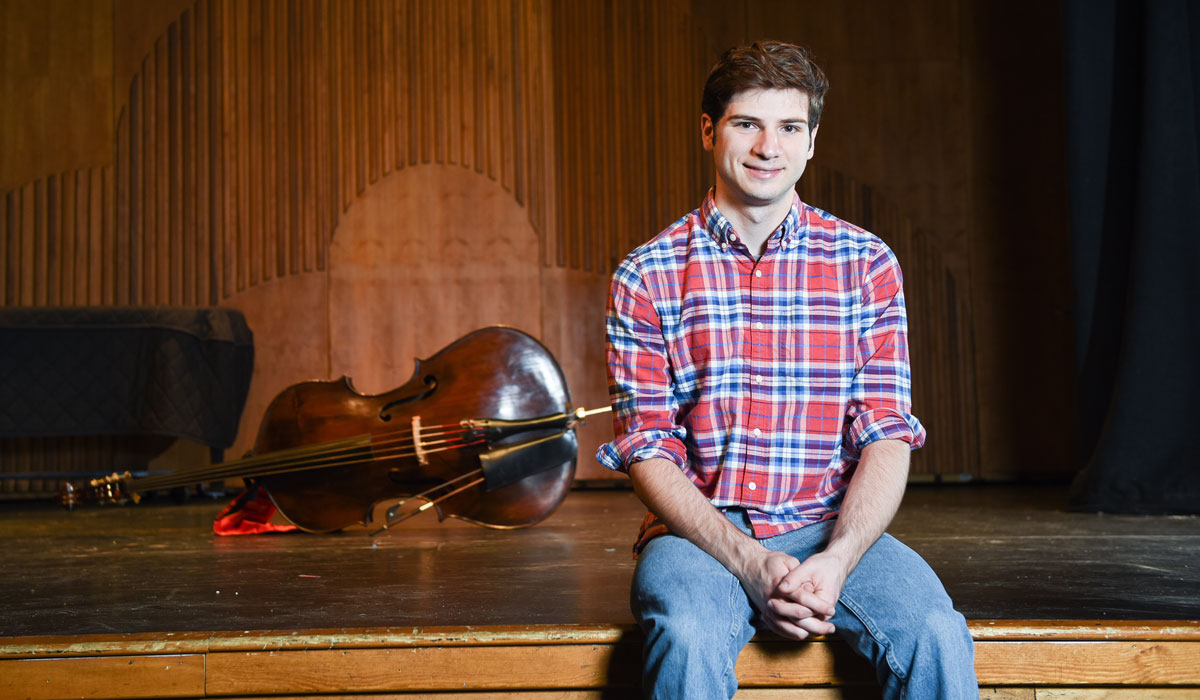 While sleeping peacefully one night, musician Daniel Bosko, a double bassist, had a dream that might have been more surprising if he wasn’t serious about his art.

“I was reading a score and playing it,” says Bosko, a junior majoring in music performance. “It was music I’ve never seen or heard before in my life. My brain composed music in my sleep!”

Jazz is Bosko’s favorite genre to play, but the piece in his dream was more mysterious, he says.

“It was modern, and hard to define. I remembered the first couple of measures when I woke up, but that was about it.”

Bosko started playing double bass surprisingly late, at the end of his junior year of high school. Though he first played bass guitar in 4th grade, he later concentrated on the clarinet. When he began playing the double bass, his teachers encouraged him to pursue it.

“It turned out that I had a good sense of rhythm and beat,” he says. And he quickly came to love his new instrument.

“For the bass player, our job is to play the most fundamental note in the ensemble,” Bosko explains. “The bass is the lowest-pitched instrument in the ensemble. And in any piece of music, the lowest note is the most important, for a lot of reasons. The bass note can mean a difference between a happy-sounding chord and a more melancholic-sounding chord. This is why I play bass. One little note I play can totally change the mood.”

During his sophomore year, when Bosko played in the orchestra for a University production of Handel’s opera Julius Caesar in Egypt, he once played the wrong note by accident. “The whole mood of the opera changed a little,” he says. “It reminded me of how powerful my instrument is.”

In addition to jazz and classical, Bosko plays Christian rock. He wants to be known for his versatility.

“When I go out in the world to sell myself as a bass player, I want to be able to tell people I can do everything,” he says.

And if that makes him seem a little hard to define, Bosko adds, that’s fine with him.

“If I were a piece of music, I would be like that piece in my dream: mysterious, simple, centered around one note. In my dream, it was G.”

— Greg Varner, Senior Writer and Editor. He can be reached at varnerg@cua.edu.

Community Service: Through Campus Ministry, he spent a week in New Mexico building houses with Habitat for Humanity. He’s handy with a saw and knows how to work with wood.

END_OF_DOCUMENT_TOKEN_TO_BE_REPLACED

Community Service: Through Campus Ministry, he spent a week in New Mexico building houses with Habitat for Humanity. He’s handy with a saw and knows how to work with wood.