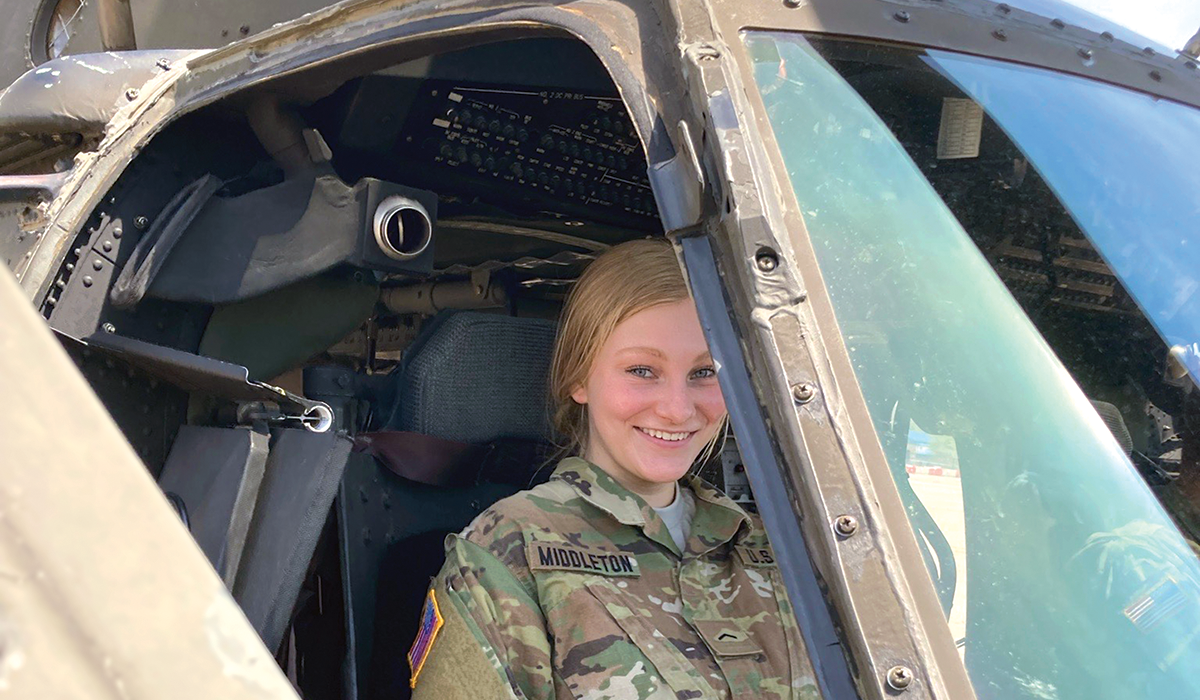 “I never wanted a typical college experience,” said sophomore Janae Middleton, who grew up with her missionary parents in other parts of the world and now calls Colorado home. “I wanted to be somewhere that has more of a ‘Europesque’ feel. I wanted somewhere I could live out my faith. I’ve always wanted to help and serve people.”

And she wanted a place where she could crawl through the mud as a cadet in an ROTC unit. “I loved running around in the woods, getting muddy, shooting the rifle with my dad,” Middleton said.

She’s found all of that at Catholic University.

In her first year, Middleton showed such outstanding academic, physical, and leadership abilities that she was awarded a three-year, full-tuition Army ROTC Scholarship.

“You learn so many things about how to handle yourself, to be well-rounded and disciplined, because you realize you’re on a team in ROTC,” Middleton said. “And the military offers a lot of opportunities to serve, some cool humanitarian opportunities.”

This past summer, Middleton got another opportunity through the Catholic University ROTC program. She was chosen as one of a select national group of ROTC students for Project GO, a Department of Defense program that sends students overseas to learn language and culture skills that will help them as officers.

Middleton chose Kyrgyzstan, where she spent this past summer studying Russian at The London School of Languages and Cultures in the capital city of Bishkek. She took classes during the week, then on weekends headed out of the city to the country’s beautiful mountains and waterfronts.

“A lot of people are very American-friendly,” she said. “A good number of the younger people also know Russian, Kyrgyz, and English, all very well. It has also been fascinating seeing the influence of American culture, from music and media especially.”

“You get very into the thick of it,” Middleton said. “They condense two semesters of Russian into eight weeks. I studied at 6 a.m., went to class all day, then studied till 11 p.m.”

Juggling a heavy load is nothing new for Middleton. In addition to her academics and ROTC duties, she works in the Disabilities Support Office. “Janae brings a great work ethic day in and day out, to both her studies and to Army ROTC,” said Stephan Murphy, director of Military and Veteran Student Services. “I’m excited to see what the future has in store for her.”

And there’s the mud. “We do field training exercises, crawling through puddles, getting close to people, literally in the mud,” Middleton said. “I’ve loved it.”