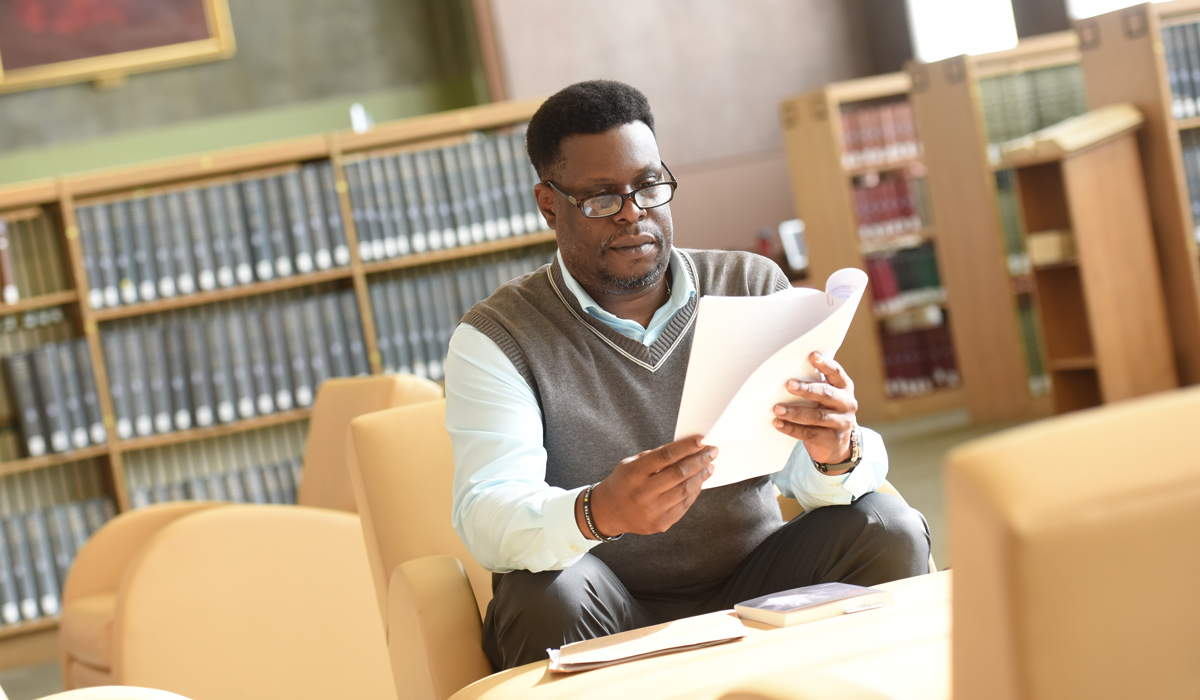 Like many adults who have made the decision to go back to school, James Dodd’s story started in a familiar place. He picked up a copy of a local D.C. newspaper and saw an ad for the Metropolitan School of Professional Studies (MSPS) at Catholic University. Dodd was 48 at the time and had done a little undergraduate work in the 1980s, but he never completed his degree.

He went to an open house at the University and met Joe McDonald, director of admissions and communications for MSPS, who went through the program himself after a 30-year hiatus from academia. Dodd was inspired. He met with McDonald, who recommended Dodd complete the degree slowly since he had a family and a full-time job with the Department of Energy. Five years later, Dodd is about to graduate with a bachelor’s degree in business management.

“If you’re out of the academic environment for 20, 25 years, you wonder, ‘Can I still learn?’ ” said Dodd. “To get the good grades, it’s about how much time you put in. How much are you going to invest?”

“To get the good grades, it’s about how much time you put in. How much are you going to invest?”

Dodd’s near perfect G.P.A. — a 3.9 — is proof of his investment in academics. But Dodd has put down roots at the University in other ways too. He’s volunteered at the same open houses he once attended, he’s sat on the selection committee for a new dean, and he’s even published original work in The Tower student newspaper and Crux, the University’s creative arts magazine.

“James is a perfect fit for our program,” said McDonald. “There are other adult education places in D.C., but we are on campus; we are part of the University. Most other programs are separate from any type of university experience. We encourage our students to take advantage of everything the University has to offer, and James is the number one example of that.”

Dodd’s University experience peaked when he was welcomed into the Catholic Church last Easter with 16 other students. Dodd was taking a course on the history of Protestantism when he started thinking about becoming a Catholic. His professor asked the class to attend a Protestant church service, which got Dodd thinking about the Catholic Mass.

After attending a Mass, Dodd realized that the experience wasn’t at all what he had expected. He kept attending most Sundays for the next year. “And while I was going, I studied a bit too. I was in a New Testament class at the time so it kind of started there,” he said. Dodd said the Catholic culture at the University made a big difference in his willingness to learn about the faith.

Dodd noted that his experience as a student taught him a lot about himself. “I was a decent student at my previous university, but I didn’t put the time in there and I had financial aid and my parents’ money. This time, it was all me. I tell prospective students who are nervous about whether they can hang to just stick with it. At some point you realize, “You know, I can do this.”

Interest in creative writing: “I would eventually like to get a master’s in creative writing. That’s been my passion. I’ve been reading a lot more John Steinbeck and John Irving to help put together some writing samples. You know you’re in good hands with Steinbeck.”

Interest in creative writing: “I would eventually like to get a master’s in creative writing. That’s been my passion. I’ve been reading a lot more John Steinbeck and John Irving to help put together some writing samples. You know you’re in good hands with Steinbeck.”