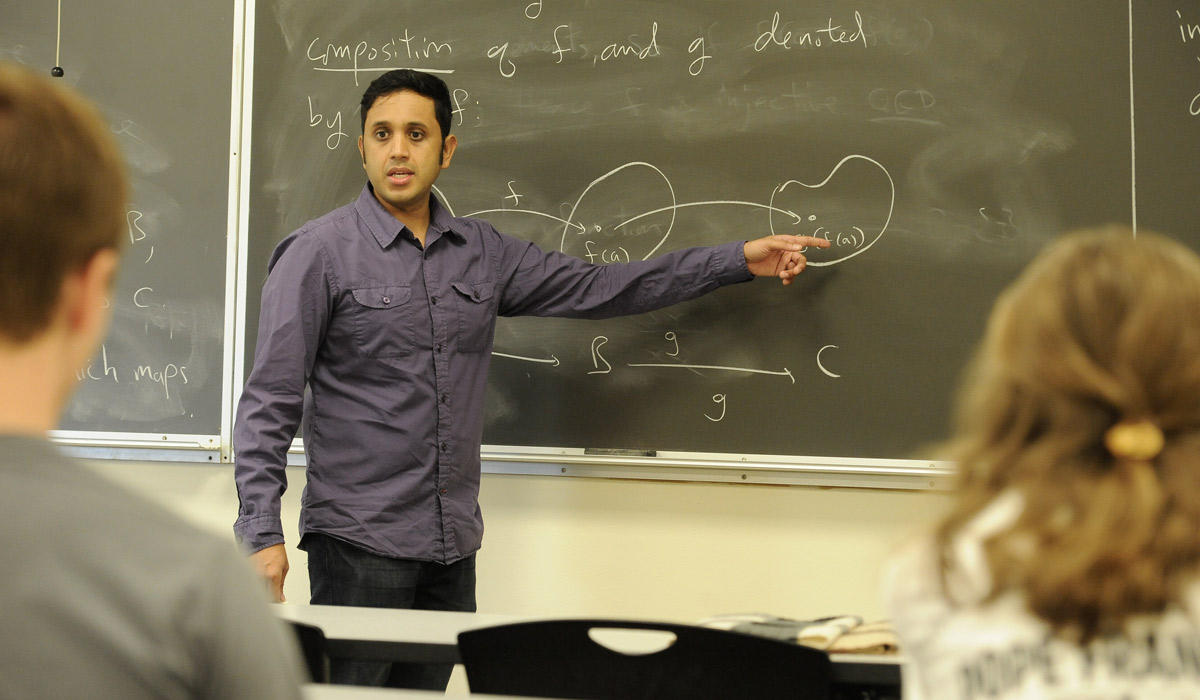 Though he has a perfectly suitable office in Aquinas Hall, Assistant Professor of Mathematics Vijay Sookdeo prefers to conduct meetings with students in a more open and relaxed setting: the top floor of the Edward J. Pryzbyla University Center with its floor-to-ceiling windows and comfortable chairs.

"Mathematics is a consistent set of beliefs... It also teaches reason and how to think, and all of those things are important for Catholics in better understanding their faith."

“I try to keep office hours at the Starbucks as much as possible,” said Sookdeo, “It’s a much friendlier environment and makes the students more comfortable and the subject matter seem less intimidating.”

Sookdeo’s approach carries over to his work in the classroom. He helps students who might be anxious by focusing more on the process than the final answer.

In grading a student’s work, Sookdeo said he’s interested in how “you thought through this problem and what were you thinking about to get the answer. How do you come to this so that the answer presents itself? I want to see your reasoning so if the final answer is slightly wrong but the thought process is good, I’ll give you credit.”

Originally from Guyana, Sookdeo was 13 when he moved to Brooklyn, N.Y. His love of math can be traced to the time when his mother was taking math courses at a local college to get certified as a teacher. She was having a hard time with simultaneous equations. Sookdeo went to the library and checked out textbooks so he could teach her. “That’s when I realized that I really liked math. By the time I got to ninth grade I was solving quadratic equations and people were like ‘how do you know this?’ and I said ‘I already taught myself’.”

Sookdeo’s journey with numbers eventually brought him to Catholic University, where he joined the Department of Mathematics in 2009. He helps run the University’s Math Center, where students can work with tutors, and serves as the faculty advisor to the University’s Math Club. “It’s important for all professors, especially at a Catholic school, to be involved in their community beyond the classroom.” Sookdeo also volunteers at local public charter schools.

He regularly takes math majors to conferences, where they give presentations “and see potential careers involving mathematics and the applications of mathematics at a higher level.”

Sookdeo also believes mathematics plays a role in faith. “Mathematics is a consistent set of beliefs,” he says. “It also teaches reason and how to think, and all of those things are important for Catholics in better understanding their faith.”