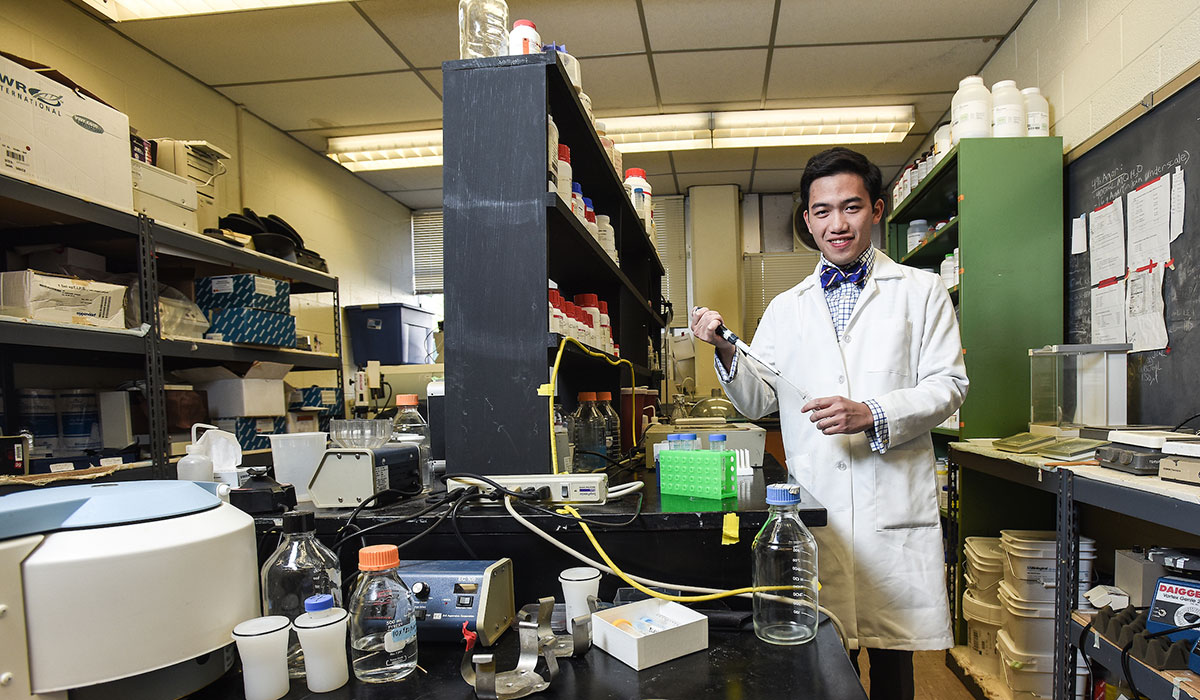 For nearly four years, senior Paul Elizalde has been researching Huntington’s disease by looking at how an incorrect number of chromosomes can affect the survival of yeast cells expressing the pathogenic form of the mutant huntingtin protein.

“Huntington’s is unique among neurodegenerative diseases because it is caused by a mutation in a single gene,” said Elizalde. “Symptoms typically begin to manifest in a patient’s 30s to 50s, but people actually have the gene from birth, so one thing I have looked at in my work is the age of disease onset.”

So far, Elizalde has had numerous opportunities to present his findings. Last year, he received a travel award to present his work at the Annual Biomedical Research Conference for Minority Students in Phoenix, Arizona. In 2017, Elizalde was awarded a prestigious summer fellowship from the Huntington’s Disease Society of America (HDSA). In 2018, he was also invited to present his research at the HDSA annual convention in Los Angeles, to which he was flown from the University of Oxford, where he was an Associate Member of Christ Church College.

“The conference was centered on patients and it was the first time I really got to know someone who had been affected by Huntington’s,” Elizalde said. “It was really important to see the effects my research could be having in real life, and how it could hopefully be improving these people’s lives.”

Elizalde first became involved in his research as a freshman, when he took on a work-study position with his mentor, Assistant Professor John S. Choy, a biologist who specializes in genome stability and plasticity.

“I was expecting that I would need a few years of classes before I could begin doing actual research work, but by the end of the first semester, I was helping out with the Huntington’s project,” Elizalde said.

“Research helps me think more critically because professors are expecting me to do the work and to be able to think about why and how I am doing it,” he said. “In this research, I am the one doing the experiment, seeing the results, and figuring out what’s going on.”

“It’s been a pleasure to see Paul develop into a young scientist through the years,” said Choy. “He’s put in many hours and worked very hard not only on the Huntington’s project but with my other graduate students and supporting their projects as well.”

Choy said he expects Elizalde will be named as a lead and coauthor on several manuscripts currently in preparation, and that he is “very proud” of Elizalde’s accomplishments.

“He has made significant contributions to every project that he’s worked on in my lab while at the same time excelling in his class work,” Choy said. “I’m confident that Paul will be highly successful in future endeavors.”

Looking forward, Elizalde says he plans on staying at Catholic University for one more year as part of the Department of Biology’s accelerated master’s program, which allows students to earn both a bachelor’s and master’s degree in five years. Following that, he said he would like to pursue research at a higher level.

“Before coming to Catholic University, I had no idea what research entailed,” he said. “This has been a great opportunity to explore different careers in biology outside of becoming a doctor.”

In addition to his scientific work, Elizalde is also pursuing minors in German studies and music with trumpet performance. On campus, he plays in several performing ensembles, including the Brass Ensemble, the Catholic University Symphony Orchestra, the Catholic University Wind Ensemble, and the pit orchestras for the Benjamin T. Rome School of Music, Drama, and Art opera and musical theatre performances.

Together with a friend, Elizalde started the Medieval Society Festival Schola Cantorum, a choir that performs sacred music in both secular and sacred contexts, particularly for Vespers and other liturgical celebrations.

Being able to dig deep into his varying interests has been a highlight of Elizalde’s time at Catholic University, as well as one of the main reasons he chose to enroll.

“I could tell Catholic University was a good place, with a great location in D.C. — that really drew me in,” he said. “Because the biology department isn’t that big, you can get a lot of contact with professors and really get to know them, and you can gain a lot of experience you couldn’t in other places.”